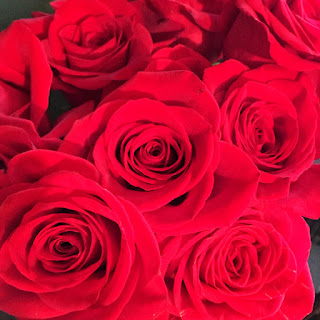 
I just discovered that the word for what I have been painstakingly building and creating for Gabi’s rabbit for the past 8 years is called a warren.
(Thanks Alicia)
Today I spent hours cleaning and reconfiguring our rabbit's habitat.
It is a long and tedious process because I secure each box and cardboard tunnel with floral wire. So removing; and cleaning is part 1; redesigning his maze is part 2;
Securing each piece is part 3.
The amazing thing is, once I put Chubs aka Bitbit back in his enclosure, he runs around and tests each and every feature.
It's almost as if he wants me to see how much he appreciates all my work.
Made me tear up. 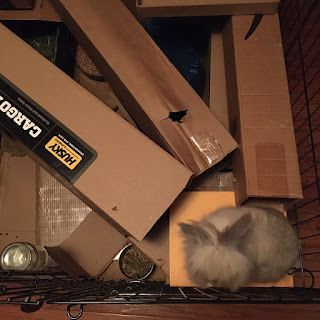 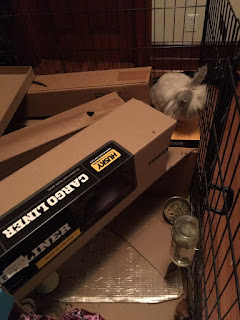 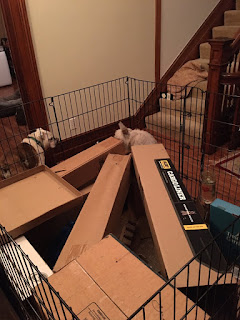 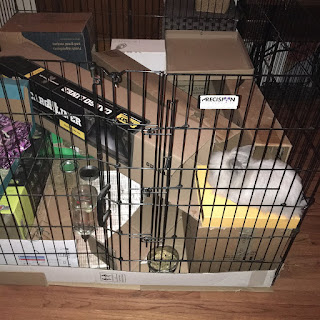 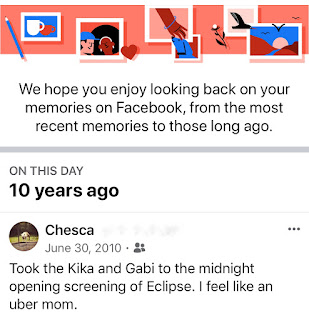 10 years ago seems like an entire lifetime ago.
I am rarely on Facebook, I get on to greet people for their birthdays- and to like whatever my sister Karen has posted regarding her cycling advocacy work.
When I got on today to greet a former student of mine for her birthday,
this memory popped up.
You know how often times when  you see something you’ve posted a decade ago, you cringe and  say what was I thinking?
That didn’t happen today.
I read this status update and was filled with even MORE PRIDE that I took my daughters to a midnight screening of a movie they were very excited to see.
In fact.... I am so proud I may need this inscribed on my tombstone.

"By the third time, the spiciness and the crunchiness, together with the spicy Louisiana secret sauce plus the fixins, failed to evoke the same joy and wonder as the first time"-My brother Ayo, describing a Popeye chicken sandwich

my resonse:
"Ayo, When relationships end, (in this case with a chicken sandwich) it is a clearing.
A new space for relationships (or other food) that are more in alignment. Trust your taste buds."

For some reason, reading his description of food made me ponder tastes, preferences and relationships.
It made me take stock of where I am in my life and how I choose to spend my time.
Reminicent of that popular quote, people come into in your life for a reason, a season or a lifetime...

It is all cyclical. 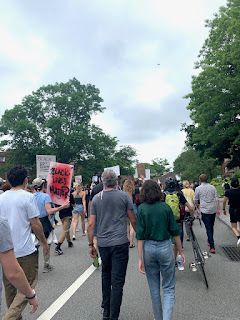 “If you’ve ever wondered what you’d do during slavery, the holocaust or civil rights movement, you’re doing it right now.”-Unknown


Strangely enough Ms Marathon sleeper Gabi woke up to the robust and vigorous sound of a demonstration nearby.
She jumped out of bed and summoned Kika, who in turn asked me if they could participate.
I said, “of course.”
And then followed it up with- “I am going with you.”

Current Status: Stay At Home; Shelter in place, Business Shutdown has been in effect since March 16th, 2020.
Today is May 12th.
.
.
I am sipping Earl Grey Tea this morning, even if I am normally a coffee drinker.

Sometimes tea seems healthier.
And I am all about trying to stay healthy during these times.

I thought the many weeks of the Corona Virus Quarantine would give me time to sit at my computer and write but somehow, the weeks got away from me.
Actually so much has gotten away from me.
My house is a mess, the seasonal clothes are still in limbo due to how cold it remains outside despite it being spring time here in Pittsburgh.
My Bible reading and meditation schedule is completely nonexistent.
I don't know how that started.
Ever since we stopped going to church due to the virus.... although I may be just using that as an excuse.
I don't know how it started.
My life tempo is off.
But in the words of Pema Chodron, "Start Where You Are."
Okay.
I am okay. As I peck this post out on my cell phone, I look around at the mess and think if I were dying right this second, what would I do? (I am not dying btw)
I think I would write last minute instructions to my peeps!
What would the heading be?
I think I would call it:
.
.
Reminders for Life

•Make your bed before you leave your bedroom.
•Say a prayer while making your bed.
•Ask and you shall receive.
•Be grateful.
•Love yourself
•Avoid sweets in the morning
•Movement is medicine
•Surround yourself with people who love, respect and support you.
•Don't assume the worst in people however,
•When someone shows you who they are, believe them.
•Forgiveness is for yourself
•Today's emotional pain is most likely unresolved mental baggage. Examine that.
•Today's dysfunctional relationships are most likely due to something in your childhood. Examine that.
•You can heal yourself.
•Tackle hard shit
•Think before you speak
•Be brave
•Speak your boundaries
•Be kind always.

•Vibrate good energy.
•Don't gossip
•Treat others the way you want to be treated.
•Clean at least one thing everyday.
•Substituting chores is a healthier form of procrastination.
•Ask questions about things you don't know.
•Keep an open mind.
•It doesn't matter how many times you wash your hands during the day if after you've come into contact with the virus you neglected to wash your hands.
•Stop touching your face.
.
.
.
(To Be Continued....my friend CK just called me to invite me for a socially distanced coffee outdoors.)

"The beginning of love is the will to let those we love be perfectly themselves, the resolution not to twist them to fit our own image. If in loving them we do not love what they are, but only their potential likeness to ourselves, then we do not love them: we only love the reflection of ourselves we find in them." -Thomas Merton (No Man Is An Island)

And Now We Have 3 dogs. Meet Roxie. 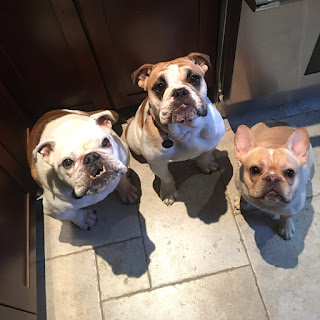 ﻿Love Everyone + Tell The Truth

From Ram Dass
(April 6,1931-Dec 22, 2019)
・・・
"When I start to get angry, I see my predicament and how I'm getting caught in expectations and righteousness. Learning to give up anger has been a continuous process.
.
When Maharaj-ji told me to love everyone and tell the truth, he also said, "Give up anger, and I'll help you with it." Maharaj-ji offered me a bargain: "You must polish the mirror free of anger to see God. If you give up a little anger each day, I will help you." This seemed to be a deal that was more than fair. I readily accepted. And he's been true to his end of the bargain. I found that his love helped to free me from my righteousness. Ultimately I would rather be free and in love than be right.

If you feel a sense of social responsibility, first of all keep working on yourself. Being peaceful yourself is the first step if you want to live in a peaceful universe.

That reminds me of a story. There's this Chinese boatman, and he hits another boat in the fog. He starts swearing at the other boatman. "You SOB! Why didn't you look where you were going?" Then the fog lifts for a moment, and he sees there is nobody in the other boat. And he feels like a fool.

Righteousness is roughly the same thing. Say, for instance, you hold a grudge against your father, and you talk to him in your mind as if he's there inside you. But he isn't there. Psychologically you think he is there, because you're identified with who you think you are, but once you begin to see this is all just a bunch of thoughts, your psychological father is just another set of empty phenomena. You are busy saying, "I forgive you, I forgive you," to that psychological father, but it's like saying "I forgive you" to a clock. There's nothing there. You're the same as the boatman.

There's no rush. Go on being right just as long as you can. You'll see that being right is actually a tight little box that is very constraining and not much fun to live in." -Ram Dass 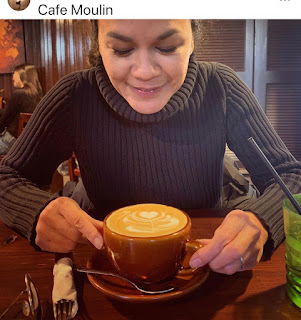 After a delicious crepe lunch at Cafe Moulin today, Kika and I stopped at Lululemon to see if anything called out to me.
I saw a pair of pants I liked which were on sale- but that meant I couldn’t return them if I changed my mind.
I couldn’t try them on at the store because I didn’t have anything on underneath the yoga pants I was wearing.
Then I thought out aloud, “Would anyone know that I tried it on without underwear?”
Kika said, “No, but you would feel guilty if you ended up not buying them.”
To which I said, “right.”
Since SHE had underpants on, I asked her if she would try them on for me. (So that in case I didn’t like them, and they fit her, she could keep it.)
So she did.
Once she had it on, she modeled them for me in the common area of the dressing room.
Next, to see if they were crowing pants, I asked her to crow in them.
So she did.
I’m laughing right now as I type this because after all that, for some reason, I still didn’t buy them.
.
.
Older Posts Home
Subscribe to: Posts (Atom) 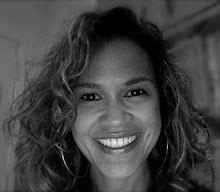 Why I Call Myself